You are here: Home / Picture Tutorials, Videos and maintenance information / Bomb Your Cotton for Maximum Profit!!

No, folks, this isn’t a new subsidy program sponsored by the Defense Department in search of new target ranges. What we’re talking about is using a piece of equipment that will easily fit on the floor of your pickup. The pressure chamber, also known as the pressure ‘bomb,’ is a device equipped with a small gas cylinder, high pressure gauge, and a thick-walled metal chamber with a top in which a cotton leaf petiole can be sealed. A young, fully expanded leaf at the third or forth node from the top of the plant is cleanly cut at the base of the petiole during the hottest part of the day (12-3 PM) and quickly inserted in the chamber. Pressure is then applied. The pressure at which a small drop of xylem fluid appears on the cut end equals the water potential (stress) that the leaf is under during midday.

“Now,” you ask, “why would I spend my time doing such a research-type activity with a few cotton leaves when I’ve got 3,500 acres to take care of?” Simply put, the cotton plant like any good farmer needs a drink when it’s truly thirsty. Give it one at the right time and it will keep working hard for you. But give the plant too much to drink and it will get downright rank and cantankerous.

The plant is the best integrator of its total environment. The impact of soil type, salinity, available water, and climatic demand will be reflected by changes in plant leaf water potentials. It is this leaf water potential (LWP) directly measured by the pressure chamber, that indicates just how thirsty the plant is and what growth processes in the plant will take precedence. The research has been done. Critical levels of stress in the cotton plant have already been thoroughly identified by University of California Extension personnel. If you’ve got 3,500 acres of cotton to take care of you can’t afford not to ask a few leaves when they’re truly thirsty.

Leaf water potentials determined with the pressure bomb were measured in negative bars. A negative one bar potential is approximately the same as perfect vacuum. Maximum yields and water use efficiency were obtained when irrigations were scheduled at a minimum LWP of -16 bars for the first irrigation and -18 to -20 bars for succeeding irrigations. This level of stress formed the basis for the control treatment. Other treatments consisted of early first irrigation, late first irrigation, early second irrigation, late second irrigation, and continued higher stress (all irrigations delayed). Only the ‘stress’ treatment on the Wasco series soil showed significantly less yield than the control and other treatments (841 compared to 1375 lbs./ac lint). On the Panoche clay loam only the ‘early fist’ and the ‘late second’ irrigation treatments yielded similarly to the control (3 year averages; 1536, 1512, and 1590 lbs./ac, respectively). However, in 1976, the ‘early first’ treatment required 4 irrigations (25.0”) compared to only 3 for the control 20.2”).

Mainstem growth was greatest during early flowering. Rates of nearly one to one-half inch per day were directly related to LWP between -13 to -18 bars. The optimal timing of early irrigations is critical to forming a plant with the right architecture to support a full boll load. As bolls set, it was found that lint elongation was not affected until LWP reached -27 to -28 bars. Late season irrigations applied when LWP is -18 to -20 bars favors lint production over vegetative expansion. This decreases the possibility of boll shedding due to excessive shading.

For the Westside Field Station only three irrigations were required for the control treatment (20.2”). To maintain the same stress levels at the Shafter site, eight irrigations were required (27.5”). The water holding capacity (WHC) of the Panoche clay loam at the Westside Field Station was at least 12.2” down to four feet. While the WHC of the Wasco sandy loam at Shafter was only 6.3”. Irrigation system inefficiencies especially for furrow systems dictate minimum losses that occur every time you make a pass. This usually means that the more irrigation events you have…. the more you lose.

Given some of the apparent soil type advantages of the Panoche series and wanting to further pinpoint stress levels for optimal scheduling, Stephanie Johnson (Hake) and Tom Kerby initiated a four year study comparing stress levels over a smaller range at the West Field Station (2). Treatments consisted of ‘wet’ (irrigations at -15, -16, -16 bars), ‘non-stressed’ (-15, -18, -18), and ‘moderate stressed’ (-18, -18, -18) irrigation schedules. For both SJ-2 and GC-510 the ‘non-stressed’ treatment was clearly the optimal schedule.

Learning to use the pressure bomb is easy. Your local farm advisor can give you the address of manufacturers and demonstrate its use. Many professional consultants also offer a seasonal monitoring service. In a water short year such as this one, the take-home message is clear. Use the plant to tell you when to irrigate. Monitoring LWP, especially on heavier soils, could save you an irrigation. Sandy soils have a smaller gas tank and will require more irrigations than heavy ground. In either case the pressure bomb is a proven, practical means for optimal scheduling of irrigations in cotton. The final result is highest potential yields and more lint per gallon of water. 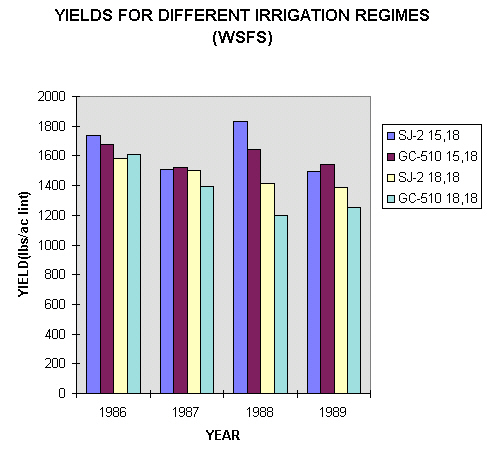