You are here: Home / About PMS Instrument / Biography of John Joly 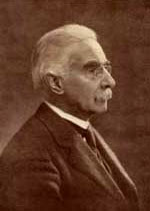 John Joly (1857-1933), a physicist and geologist born in 1857 in Offaly, Ireland.  He was the son of J.P. and Julia (de Lusi) Joly. He was educated at Trinity College, Dublin, Ireland, where he got a B.A., M.A. and D.Sc. (Marquis Who’s Who). He got an LL.D. at the University of Michigan; an Sc.D. (honorary) at Cambridge University, England; and an Sc.D. at the National University of Ireland. At Trinity College, he was a demonstrator in civil engineering from 1882-1891, a demonstrator of experimental physics in 1893, and from 1897 a professor of geology and mineralogy. He was Warden, Alexandra College for Higher Education of Women.

He was author of several books, including On the Specific Heats of Gases at Constant Volume, On a Method of Photography in Natural Colours (1896), Radio-activity and Geology, The Local Application of Radium in Therapeutics (1914), The Birth-Time of the World and Other Scientific Essays (1915), Synchronous Signalling in Navitgation, Reminiscences and Anticipations (1920), Radioactivity and the Surface History of the Earth (1924) and The Surface History of the Earth (1925); 2nd ed., 1930). He was editor (with others) of the Philosophical Magazine from 1901. He devised the diffusion phytometer, meldometer, and steam calorimeter. (The meldometer, described in an article by Joly in Nature in 1885, was an apparatus that was an adjunct to the mineralogical microscope, and it allowed the approximate determination of the melting point of minerals.) He developed a uniform radiation method for use in cancer treatment and was a color-photography pioneer (Marquis Who’s Who, 1968).

Joly’s work on crust formation of the earth is his best known, in which he presented a theory on continental origins based on the process of convection (Calef, 1971). He proposed that heat was generated in the interior of the earth by decay of radioactive elements. Because the heat could not escape sufficiently rapidly by other means, it started convection currents which carried hot material toward the surface where it colled and sank, thus setting up a convective cell ciruclation. He suggested that the earth’s crust was dragged sidewise at the top of the cell, which caused buckling and folding and thus mountain making, and the crust collapsed above the sinking portion of the convection cell. The greatest difficulty with this theory was a lack of observational data indicating any convection currents or cells (Calef, 1971). Joly died December 8, 1933.

This Biography of John Joly was compiled by Mary B. Kirkham, Kansas State University. It was quoted directly from her book – Principles of Soil and Plant Water Relations, page 335-336. Elsevier Academic Press – 2005.