You are here: Home / About PMS Instrument / Biography of Per Scholander 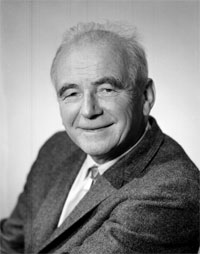 Per Fredrik Scholander a physiologist, was born in Orebro, Sweden, on November 29, 1905 and he married in 1951 (American Men of Science, 1961). He got his M.D. degree in Oslo in 1932 and his Ph.D. in botany in 1934. He was an instructor of anatomy in Oslo between 1932 to 1934 and was a research fellow in comparative physiology between 1932 to 1939. He moved to the United States and became a naturalized citizen. He was a research associate in respiratory physiology at Swarthmore College in Swarthmore, Pennsylvania from 1939 to 1943. He was a Rockefeller fellow from 1939 to 1941 and a research biologist from 1946 to 1949. He was a major for the U.S. Army Air Force Research from 1943 to 1946 and during this time was chief physiologist test officer, Air Force Base, Eglin Field (1943-1945), and an aviation physiologist at the aeromedical laboratory of Wright Field, Dayton, Ohio (1945-1946). From 1949 to 1951 he was a special research fellow in biochemistry at Harvard Medical School. He was a physiologist at the Oceanogrpahic Institute in Woods Hole, Massachusetts between 1952 to 1955. In 1955 he returned to Oslo where he was a professor of physiology and director of the institute of zoophysiology until 1958. During this time (1955-1958) he also was an associate at the Oceanographic Institute in Woods Hole. In 1958, he became a professor of physiology at the Scripps Institute of Oceanogrpahy in La Jolla, California, where he spent the rest of his career.

His honors included being an investigator in the Arctic Research Laboratory of the Office of Naval Research in Alaska and Panama from 1947-1949. He was a member of the polar research committtee of the National Academy of Sciences and participated in artic and tropical expeditions. He received the Legion of Merit in 1946. He was a member of the National Academy of Sciences, American Association fir the Advancement of Science, Physiology Society, Society of Zoologists, Society of Plant Physiologists, Society of General Physiology, American Academy, Artic Institute of North America, Norweigan Academy of Science, Norwegian Physiology Society and Botanical Association of Norway. His major research areas were arctic botany, respiration of diving, cold adaptation, microtechniques, gas secretion, water and gas transport in plants, and gas in glaciers (American Men of Science, 1961).